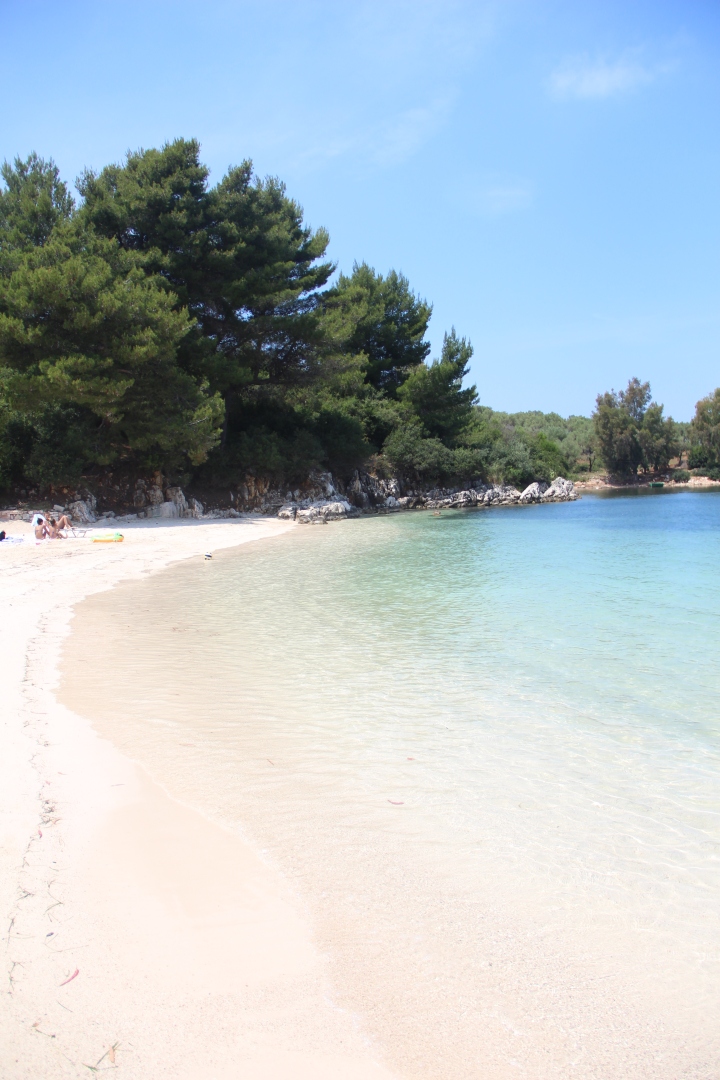 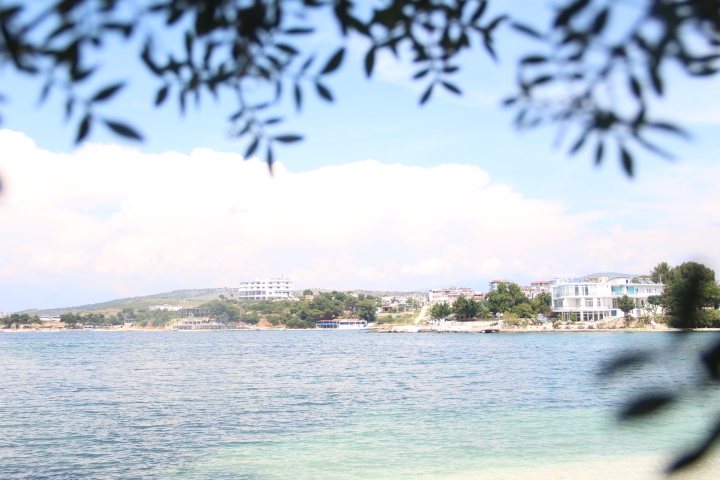 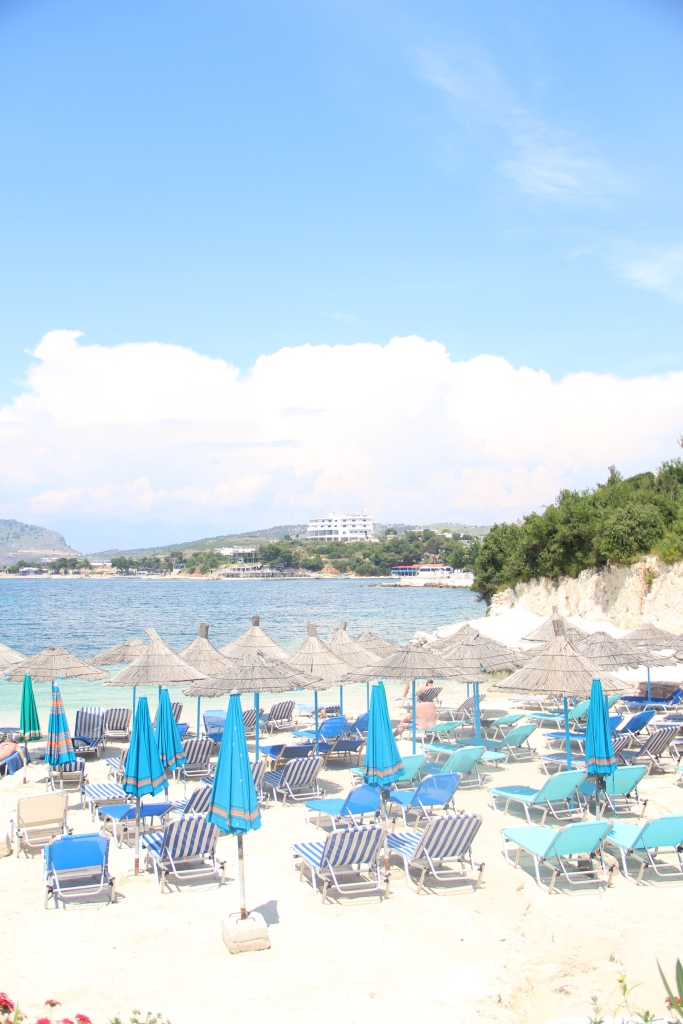 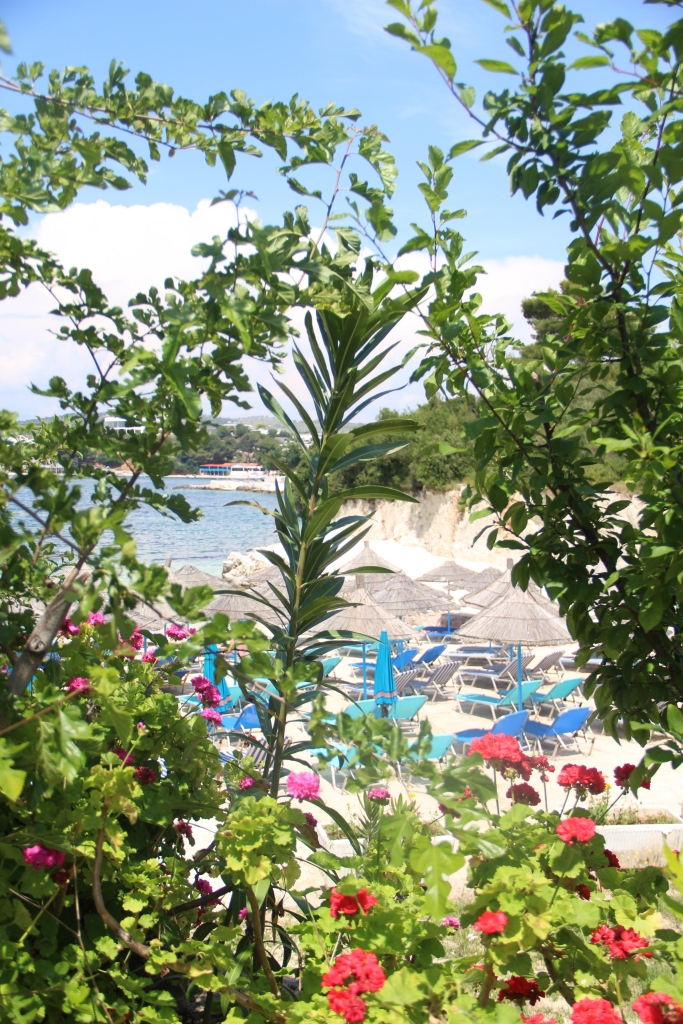 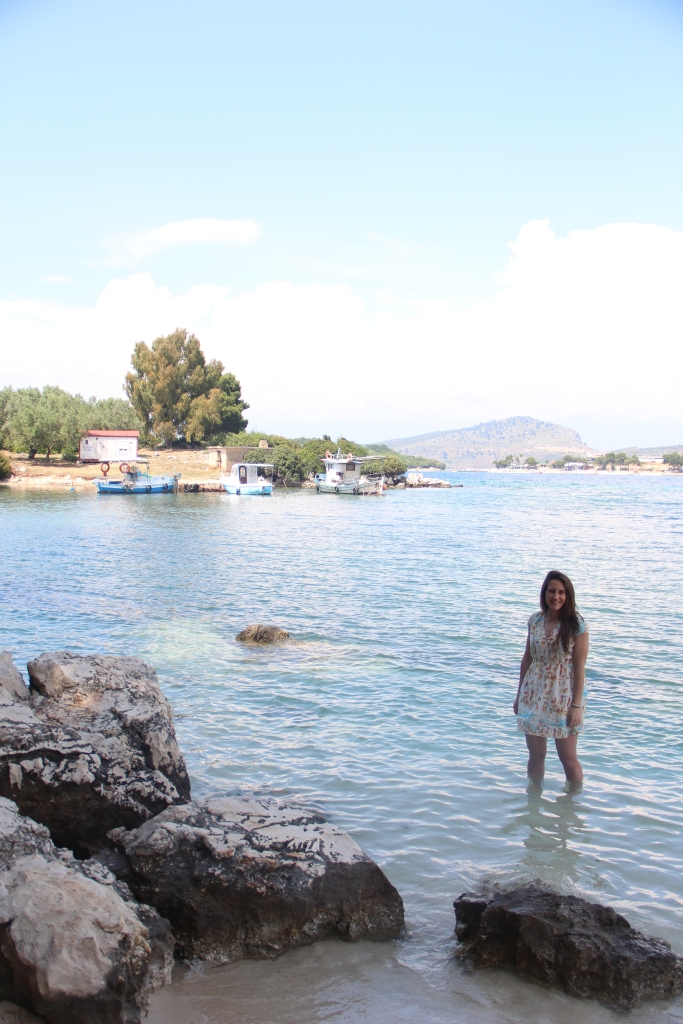 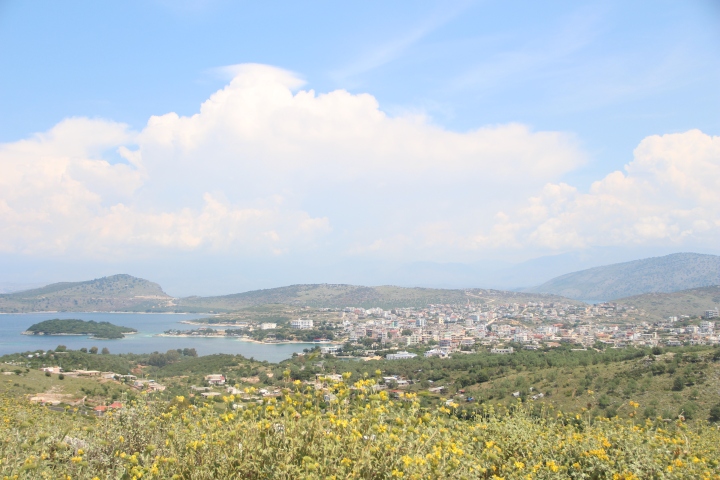 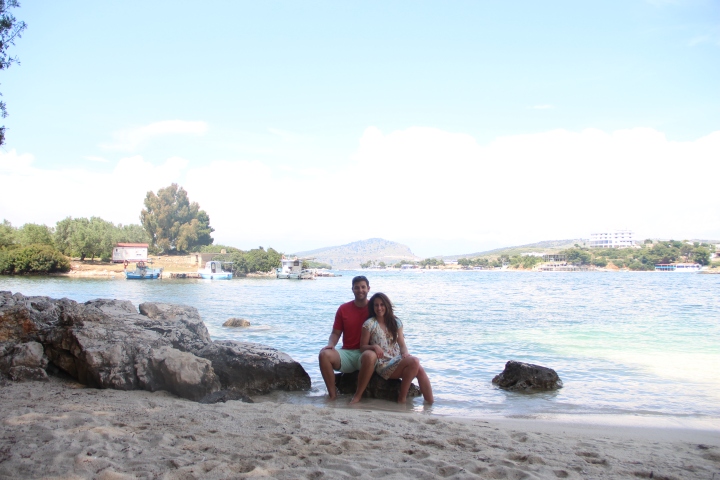 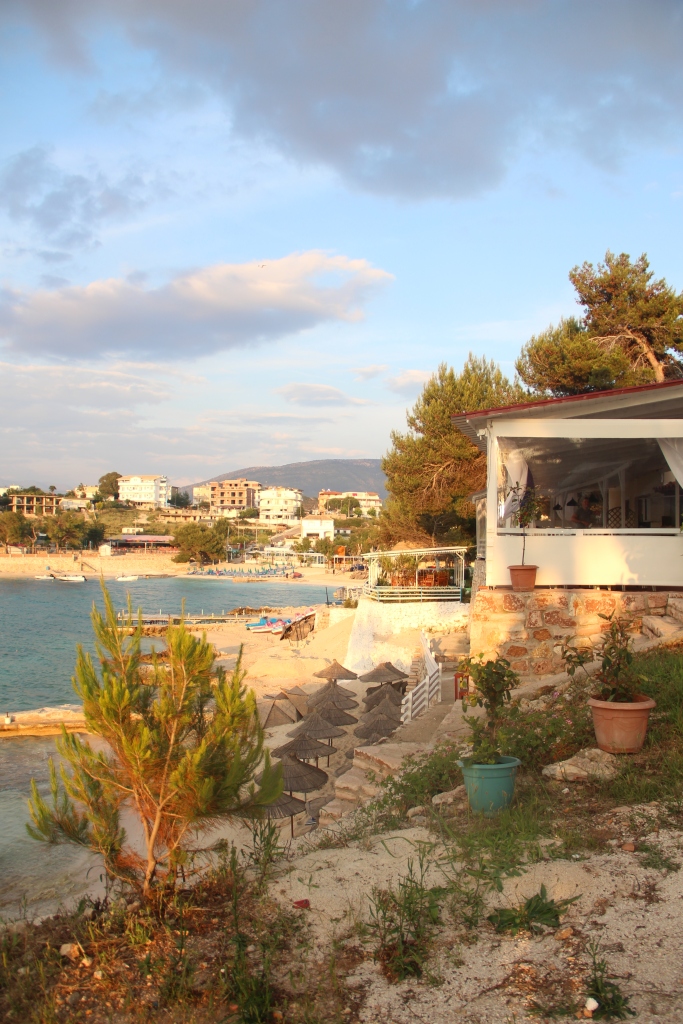 Ksamil, sun and sand; we came for the pristine and beautiful Adriatic beaches, just opposite the more famous Greek island of Corfu. This was our treat after days of driving and exploring. It was as relaxing as we had hoped. Perhaps even more than we had hoped, as we quite literally had the entire place to ourselves.

It was our last full day in Albania, and we let ourselves sleep in, since we were exhausted from the last few days of constant driving and moving. It’s worth noting that the time was also weird for us; we were so close to Greece (we could see Corfu from the balcony) that our phones kept switching between Greek time – which is an hour ahead – and Albanian time, so I’m not even sure what time we did anything all day, which actually ended up being nice and freeing. Whenever we did get up, we both went for a long walk into town along the coastline. Then, finally, after days of anticipation, the beach.

Getting there was a bit confusing. We drove 15 minutes south to Ksamil, expecting a natural, wild, island-like setting. Instead, we found another mini, developing city. After getting lost on some dirt roads and driving into the hills for views of the city, we eventually parked our car at a place called Lori Beach to spend the day. It was so pretty, white sands and turquoise waters. We had nearly the entire thing to ourselves – chairs, umbrellas, beach bar and all (though, we were never really sure if the beach bar was open or even staffed). There was one family, but they left soon after we arrived. Otherwise, there was only one man and one separate woman. Sometimes, the bar played music. Beyond that, it was quiet.

We stayed on that beach, lying on those chairs in the sun until 5:00 pm, reading, swimming, napping. It was so, so, so peaceful. I still can’t believe that of all the people in the entire world, we were the only people there.

After 5, we finally brought ourselves to leave in search for food, and ended up at a place slightly up the coast called Bar Restaurant Korali. We drank Mojitos and more local white wine on the deck, sitting in the breeze, watching the waves while snacking on another local speciality, peppers and cheese. Then, for dinner, we finally were able to try the local mussels (a speciality and national export – so fresh!) and another local dish, a grilled vegetable plate, which honestly reminded us of pizza. The staff even brought us complimentary dessert – apple slices and ice cream served in this absolutely amazing sauce; we assumed it was honey-based, but when we asked, we were told it was burnt sugar with citrus and cinnamon. It was such a great meal, one of the best of our trip, and certainly perfect for our last night.

By the time we drove back, the sun had already begun to set. We went across the street to buy one last bottle of local wine, and then we drank it on the balcony, the very end of our wild, unpredictable Albanian adventure.

Posts from this trip: 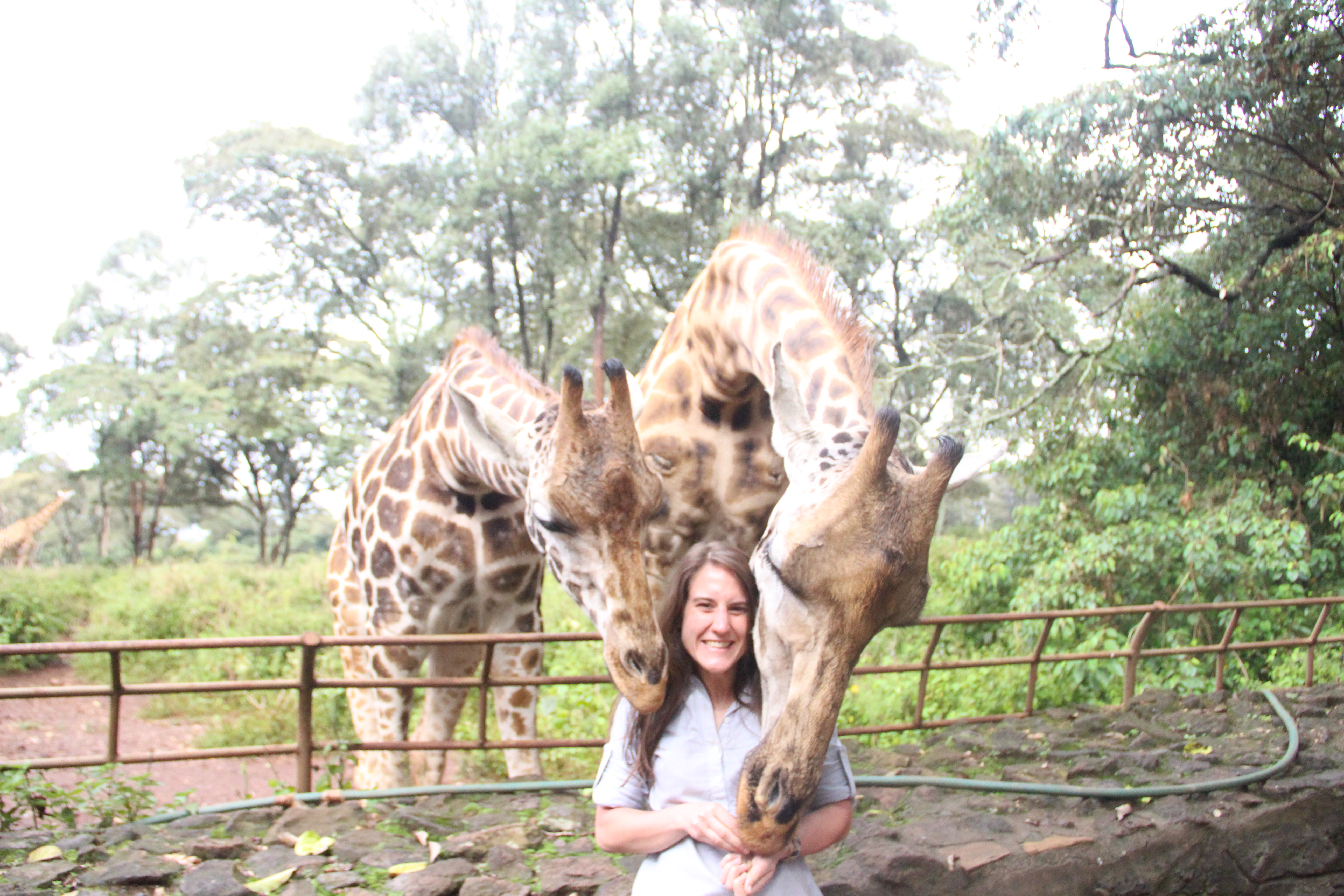 Massachusetts-born, American in Europe. Living in Cambridge, traveling the world, and reading a lot.

Curiosity. Adventure. Travel, Innovation, Design, Economics – and all of their links.

do not feed or molest the alligators 🐊 // # florida
heyy girl will you be my valentine? because you otter 🦦🌿🦦🌿🦦 // love, St Pete
there was a pelican party at the neighborhood lake last night 🌿💃🏻
cats of treasure beach 🏝🏴‍☠️✨ // because of course I found them . . PS I love all the light & texture & color in this little piece of the world
treasure beach 🇯🇲🌿 // yellowgrey sunsets, dirt roads, green mountain backdrop, that perfect Caribbean-blue water, & a community-based tourism economic model . . Completely fell in love with this quiet corner of Jamaica’s southwestern coast & all it has to share about life on this little island 🌴🥥🍉🍍🌊✨ . . no walled enclaves - just Jamaica the way we wanted to see it
two weeks ago I was in Bratislava and last night I was in Miami and last week I was in Jamaica and last month I was in Boston and right now, finally, I am at home in St Pete snuggling with my cat. And there’s no place that I’d rather be 😸♥️ . . . ((& now I have 9 gazillion pictures from all over the world to organize, starting tomorrow after I sleep as long as I want))