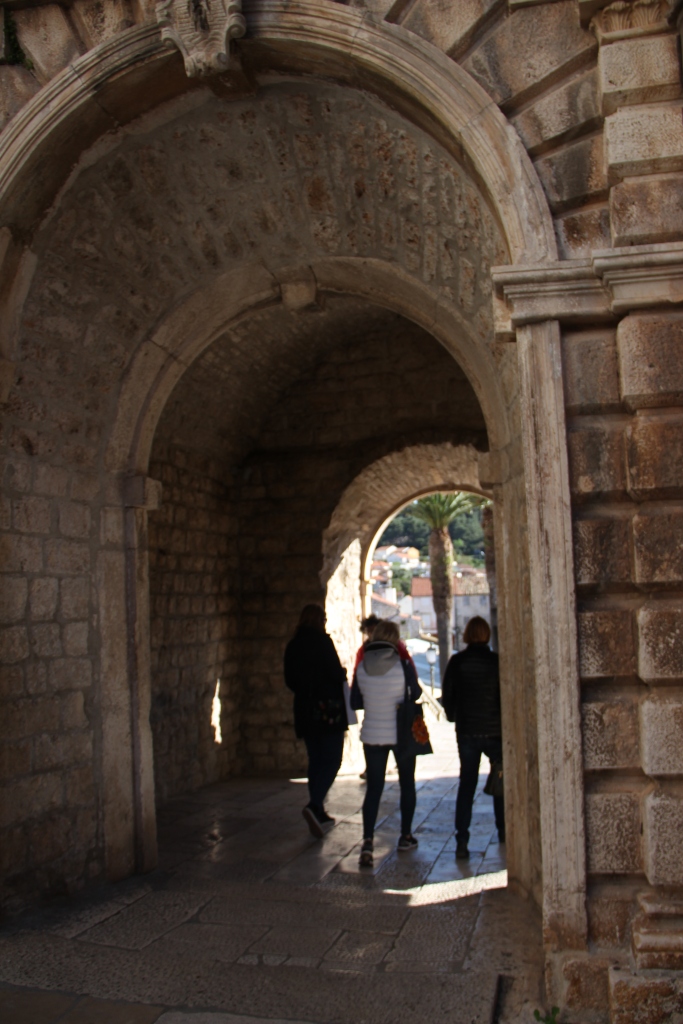 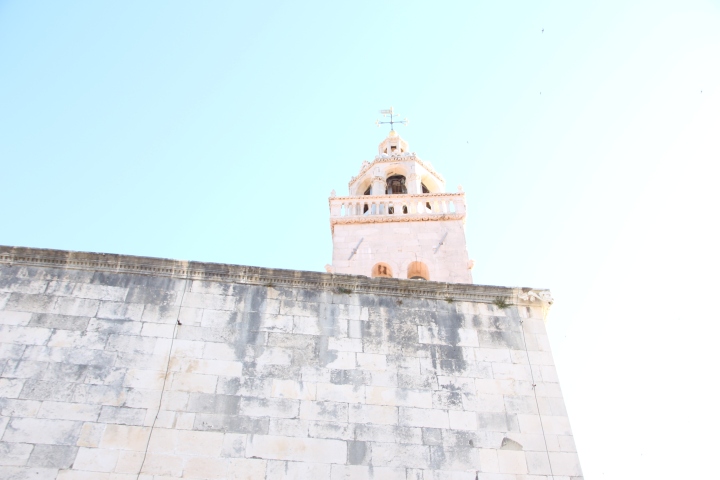 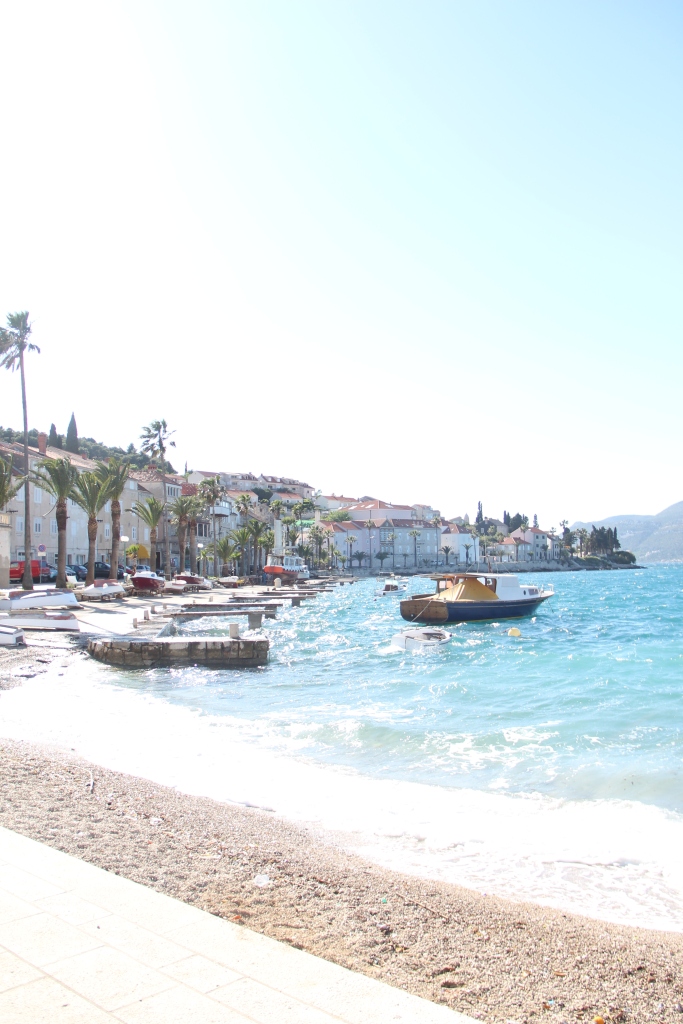 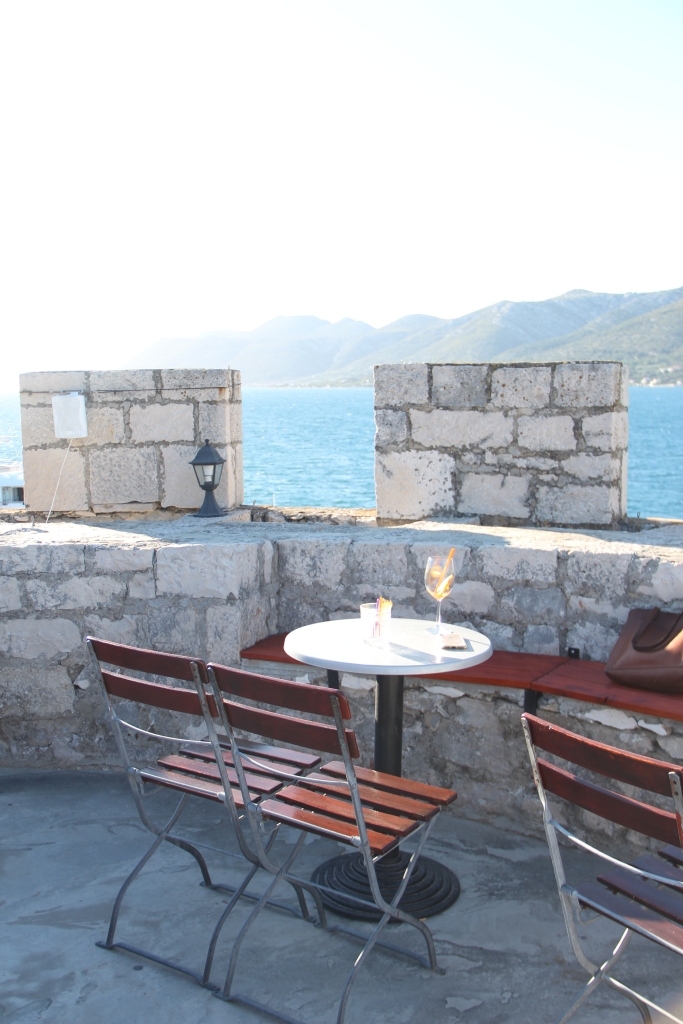 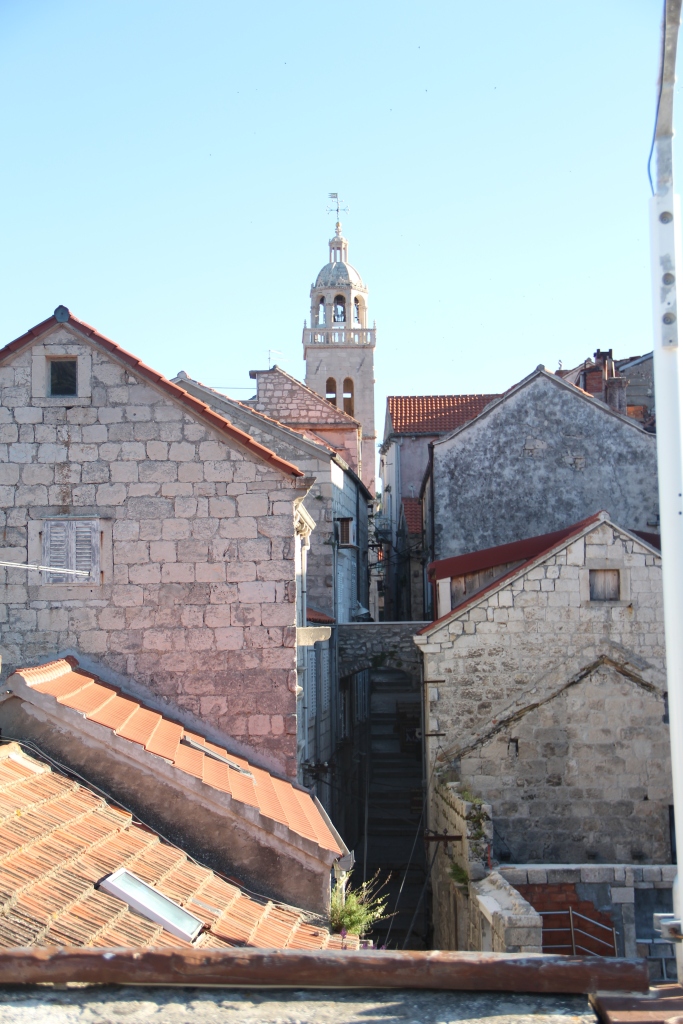 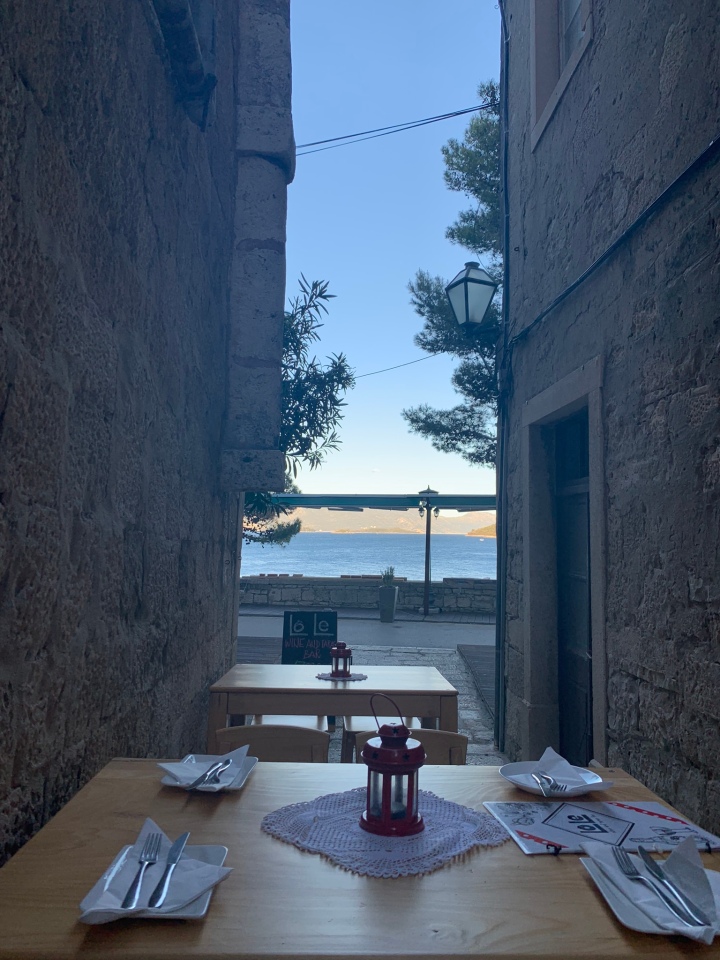 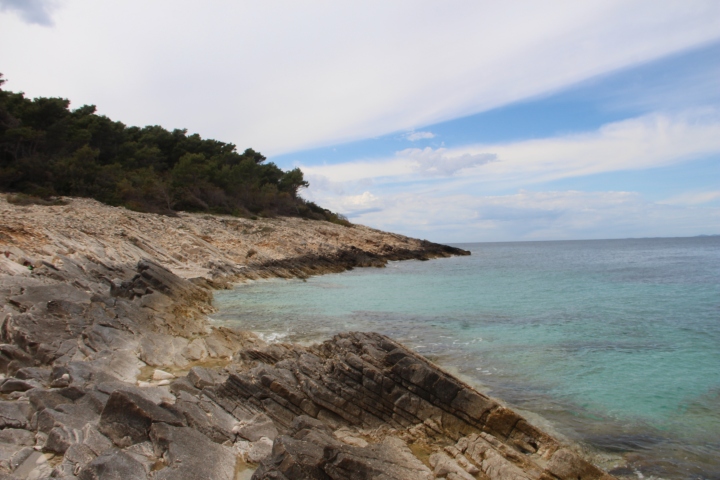 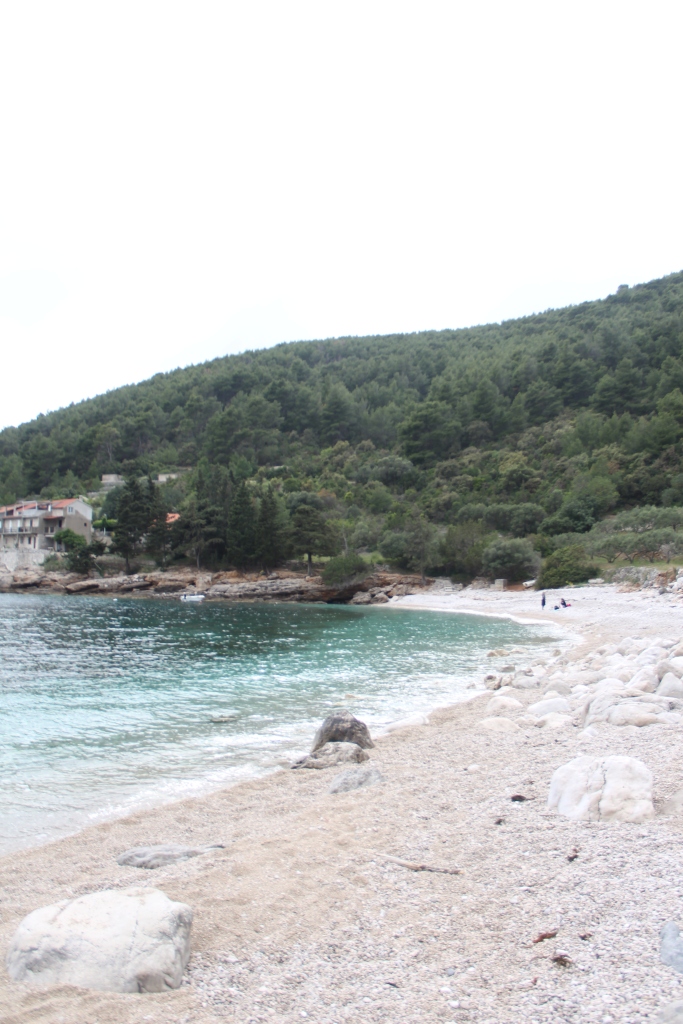 All of Korčula Island smells of orange trees and tastes divine.

Hair, uncontrolled, in the wind.

We crossed the border easily into Croatia, back into the European Union. No one even checked our passports, just waved us to the other side. The change in the quality of the roads was immediate. Soon, we were on the coast again; mountains on one side, fishnets and the Adriatic Sea on the other. The drive through the Pelješac peninsula region was dotted with signs for fresh oysters and stone walls leading up into the hills. We arrived in Orebić around 12:40 pm, in time for the 1:00 pm ferry, and a long line of cars greeted us. It was all a bit confusing, but we figured out we could buy tickets online from our phones, and we boarded the boat in our car. Fifteen minutes later, we drove on to Korčula, the first of two days on the island.

Korčula is a quiet island with a quaint old town, a dense forest, and an assortment of beautiful, natural beaches. It’s known for vineyards and for fresh, delicious food. We chose to come here specifically of all the Croatian islands for these reasons, even though it would be slower and quieter in the off season. Our Airbnb was close to the ferry, the lower level of a family home with the loveliest garden terrace all to ourselves. As soon as I stepped out of the car, I could smell the fresh, sweet floral of what I now know as orange trees. Everything was beautiful. Natural. Fresh. We walked fifteen minutes along the waterfront path from our temporary home to town, dodging off season construction along the away. Everything was so bright. Windy.

Through old gates, along the spine of fishbone streets. We sat at a café on the northeastern tip, in the sun, on the water and split a bottle of pošip wine and a platter of local cheeses, fish, and veggies. The zucchini was unforgettable. The oils. I had a bowl of gazpacho that was thick and fresh like a pureed tomato. Everything was perfect. Food, wine, sun, sea. The old town was mostly empty, save for a few random senior tour groups that would pass by now and then. It felt as if we had it all to ourselves.

We wandered more. Battling violent wind. Found our way into a cocktail bar on the roof of a castle-tower at the top of the peninsular (we literally had to climb a ladder to get there). In the summer, we read, it’s crowded. This day, only two others were there, and they left shortly after, leaving us with it all to ourselves. The drinks were nothing special, but having the entire view was. Orange-brown rooftops, watching birds fight the wind, sunglasses in the sunshine. Bright blue and stone. We only left when it was too chilly to stay any more.

Still full from lunch, we found a small tapas bar, a tiny place with a tiny kitchen on a tiny sidestreet. It was one of our best food experiences anywhere, ever. The one table inside was occupied when we arrived, so we sat outside. We split a bottle of grk wine, made locally in nearby Lumbarda, and combined a cheese and seafood platter; when we tried to order a vegetable plate, the owner told us that his garden hadn’t bloomed properly yet, but suggested an octopus he caught that morning. It was that kind of place. And then there was the dessert, something between ice cream and cake. Everything was so good.

Before leaving, we started to talk briefly with the owner. He was happy to hear that we had read about the restaurant online; when we mentioned we were interested in visiting a local vineyard the next day but weren’t sure if any would be open on a Sunday, he pulled out his phone and called his friends until he found someone willing to open for us the next day.

And then we began the walk home, eventually settling on taking one of the nearby taxi cabs. When I stepped onto the street again, the smell of orange trees immediately overwhelmed me.

All of the stars in the sky.

The third morning of our trip began slowly. We were happy to be able to stay in one place and sleep a bit, and we did exactly that. We ate breakfast on our terrace, in the sun, before setting out to run along the water. After running, we ate again on the terrace. No agenda, no plans for the day.

Eventually, we decided to drive the forty-five minutes across the island to the western most tip of Vela Luka to take in the landscape. It was one long, winding, narrow road the entire way. The town of Vela Luka was quiet with small signs of life; we only passed through en route to a more rural area. Here, it was dirt roads, stone walls, olive trees, and no one.

We parked on a narrow dirt strip and walked ten minutes through the woods to the beach, Martina Bok, an aquamarine, shingle-stone paradise all to ourselves. The water was cold on my toes; we sat for a while. A small fish boat hummed by the shore. An older couple and two dogs appeared; soon the couple was naked and swimming in the sea. We walked back, partially to escape the strangeness of the situation, but more so that we wouldn’t be late for the winery visit that had been arranged for us the night before by the restaurant owner.

The winery was a twenty-five minute drive away in a place called Smokvica, a quiet, orange roof town built into the hillside. Inside, two children played with a kitten and a wine cork. An uncomplicated, rustic, barn building. We tried three wines and bought two bottles to take home, but the best part was after the tasting. Sitting on the terrace outside, staring across the garden at the view of the town in the hillside, smelling the orange trees. It was a simple place. A family home. Everything was perfect, and I was sad to leave.

When we did leave, we drove to one of Korčula’s small, turquoise beaches. Again, down a narrow dirt road. I have no idea where we were on the island, but we had the beach nearly to ourselves. A small restaurant, shuttered for the offseason, stood near the main path; a few people say in the distance. Beyond that, just us. I filled my pockets with seaglass and eventually fell asleep. If I wasn’t hungry and cold, I probably would have napped there for hours. Instead, after about forty-five minutes, we left in search of dinner in Lokrum.

We were worried that it might be difficult to find a place to eat that would be open on a Sunday during the offseason. First, we parked along the harbor in town and walked a ways along the water only  to find the place we had in mind boarded up until summer. So I was hesitant when the next place suggested appeared to be on a tiny side street off the side of the road with no parking. After driving around trying to find an ok place to park, we eventually gave up and parked literally on the side of the main road, walked to a sign, and followed a dirt path to a clearing that contained the small house restaurant and little garden surrounding it. There was a “Cash Only” sign on the door, so we hesitated outside; before we could leave, a young man opened the door and eagerly welcomed us inside, insisting that we sit and eat and come back with cash to pay later at any time, even the next day (!). And once we felt ok staying, he whipped out homemade grappa from under the counter, one sweet and one herbal, and served them to us on the house. We sat outside in the garden with blankets and small lanterns. Everything smelled amazing, each light breeze carrying the scent of a new herb. Fresh cilantro filled the air. The was one of the best meals that I have ever had, anywhere, in my entire life. Soft, melt-in-your mouth bread-like bits of fried dough. Grk wine, made nearby in Lokrum, continuously refilled on the house. Seafood pasta wrapped in brown parchment paper. Homemade figs in cinnamon-wine paste with the most wonderful, fresh mascarpone cream that I have ever tasted (also on the house). It really was a meal I’ll never forget. It was surreal to be sitting there, alone, in what appeared to be someone’s private garden. Welcomed, honored to be able to share the experience of this meal here at this family business.

We left our smiling server friend, drove in search of an ATM, and returned to pay. It was late, and we were tired and full. Back home, as I fell asleep, I could hear the light rain outside.

Via: Drove just under 4 hours in our rental car* from Mostar, Bosnia and Herzegovina. This included taking a short autoferry from Orebić , Croatia. *We used Sixt and filled out the cross-border paperwork when we picked up our car in Zadar, Croatia.

Massachusetts-born, recently repatriated former expat, back in the USA after four years abroad in Cambridge, England. Living in St. Petersburg (Florida, not Russia), traveling, and reading a lot.